I’m just throwing this out there to see if it sticks. The animal–large and kind of ominous but pretty harmless in the end–is a common sight across Vietnam (and Southeast Asia), especially in the mountainous north. But the big dark brooding beast has never really in my experience been anything other than placid and incurious. More content to sit bathing in a cool muddy pond under the midday sun or to let a child ride along on its back than to buck or bray or do whatever it is that a 1,200kg horned bovid does.

According to Wikipedia, thousands of years of domestic breeding have probably dumbed the noble water buffalo down quite a bit, and therefore enlightenment could be something of a leap for them. So maybe Buddha they’re not, but I do still envy the way that everything just seems to kind of hit them and then sink without bubbles. I want to be like that.

Train travel has always held a certain mystique for me. Call me a hopeless romantic, seduced by tales from the rails my whole life. I’ve longed to tie a handkerchief to the end of a long stick and walk toward the distant horizon on the right side of the tracks waiting to hop the next northbound car. To watch as wheat fields sway in the evening wind with nothing but a bottle of hooch and a bag of peanuts in my lap. Eventually the salty ocean air in my hair. To have a reason to say the word caboose in daily conversation. But that’s not how it happens. And certainly not in Vietnam.

We board the train in Yen Bai about five hours north of Hanoi and ride on hard upright benches the whole way back. A garbled voice occasionally comes over the loud speaker announcing our next stop, but what’s being said would even to a native speaker seem like nothing more than a distorted mess. We stop every thirty minutes. We’re taken in as a great inconvenience to the old woman stretched out lengthwise across our reserved seats, and though she eventually concedes the space it’s not without great theatricality. Thirty minutes later she’s peacefully asleep on the floor beneath the benches. So it goes.

The rest of the ride passes by in small vignettes. I make the mistake of telling the four men sitting behind me that I like the taste of Ruou Bac Ha, a special kind of corn moonshine (they call it wine, but let’s be real here) from the small northern town of Bac Ha. I then spend a significant amount of time trying to fend off their advances to get absolutely shitfaced on the ride back. They are obviously well on their way.

The other passengers, my travel mates included, periodically drift off to fitful sleeps and while away the time in whatever manner they can. They smoke cigarettes in the empty spaces between the cars and stretch their legs when they can at the stops along the way. Endless rice fields pass by outside the windows. Fruits are peeled and passed around. The tea and tobacco man sells his wares in the aisles. And then eventually we land in the capital and it’s over. So no wheat fields or ocean spray but there’s something about it nonetheless. It’s a great way to travel. Or maybe I was just in a really good mood. 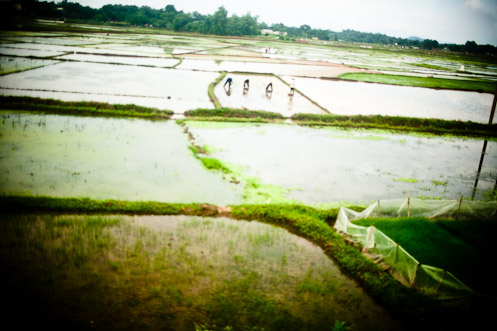