Just a small portrait with disco lights. Not much else to say.

Anyway. This post is about music. While Hanoi isn’t NYC or London or anywhere else with numerous nightly shows and bands constantly touring through, the scene here is a lot more vibrant and diverse than most people first assume. Last month I took portraits of 15 different musicians/bands for The Word Hanoi magazine. Styles ranged from indie rock to jazz to experimental folk to classical to teen pop to idol winners to stoner metal and beyond. That’s pretty diverse. They were all based in Hanoi. So yeah. I say: Less talk. More rock. 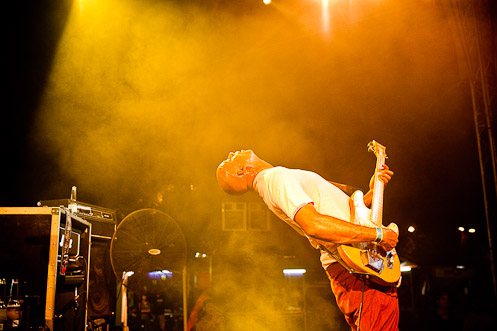 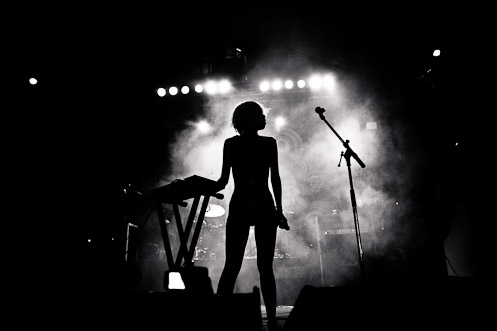 About two weeks ago I was asked by the local CAMA guys if I wanted to be the official photographer for their 2010 international music festival. I answered with an obvious yes, not only to be able to get on stage to take pictures of all the amazing acts that were scheduled to perform, but also to be able to tell security guards at the gates that “I’m with the band”.

I never got to say the four magic words, but it was a great time nonetheless. And I was blown away by most of the bands that played the fest, many of whom I’d never heard of before. Look out for local headbangers Ngu Cung, Japan’s short-shorted Molice, the awkwardly-Asian cuteness of Queen Sea Big Shark and the psychedelic pop madness of USA-by-way-of-Cambodia’s Dengue Fever. All pictured above in various acts of rock and revelry.

For more images and information on the festival, the charity it supported and links to band websites and (much much!) more, stop in at Aidan Dockery’s BLOG as well. Satisfaction guaranteed.

This guy has been making the Vietnam blogging rounds, with posts from photographers Aidan B Dockery and Quinn Ryan Mattingly, but he certainly deserves at least a little more modest praise for his capital efforts this past weekend in Hanoi. It was a great show, and one that I nearly missed. So thanks to CAMA and everyone else who had a hand in the evening. Good work all around.