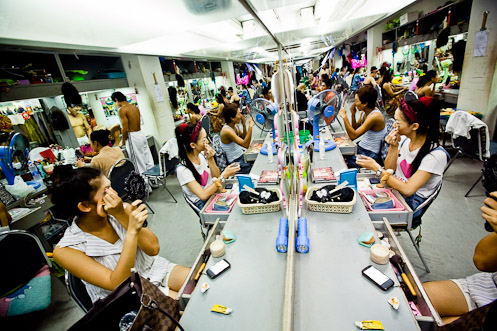 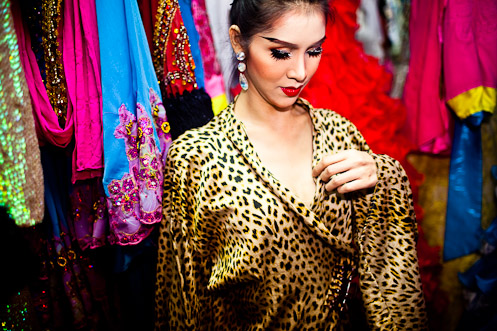 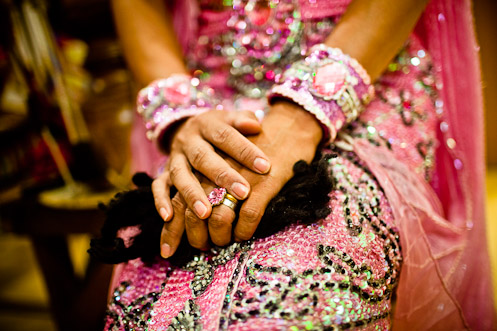 Much has been done in the way of backstage photographs of ladyboy cabaret shows in Bangkok and Pattaya, but I felt like I couldn’t readily talk about or explore this aspect of the culture without experiencing it firsthand. So my assistant contacted Tiffany’s Show in Pattaya and asked their PR director if it would be OK for me to come by and take some pictures. After a lot of back and forth and a few roadblocks, she finally agreed. The above images are from the hour that I had with everyone as they prepared for their show.

It’s funny how connections are made. Another assistant had introduced me to her friend in Bangkok, and I photographed her and agreed to come by the next day to meet some of her friends as they did hair and makeup for an iPhone 4 commercial. There I met another woman named Mae and took a portrait of her. When I mentioned that I was trying to get backstage at Tiffany’s, Mae told me that she had a friend that was in the show. Her friend, Tu, couldn’t get me backstage, but invited me over to her house to take her portrait in Pattaya, on my first night there, at about midnight after her last show (that’s another post). First we stopped by the main choreographer’s house and I met him and another show performer while there. The choreographer owned a marble bust of Marilyn Monroe adorned in a retired stage outfit from one of his earlier shows. Nothing to do with connections, but it was amazing. They said nice things about me to the PR director and I was eventually granted the access I wanted on my last day there. It pays to be nice. And ridiculously good looking and charming.

Backstage was lots of makeup. Like an hour of straight makeup. Foundation. More foundation. And then a little more foundation. Some color. Some eyelashes. Some glitter. Some crazy outfits. I had a great time and everyone was very nice and welcoming, but after about fifteen minutes I felt like I was spinning my wheels. How many times can I get someone’s reflection in their hand mirror? How many ways can I photograph someone with pursed lips applying gloss? But just being there was great. Seeing it happen, the complete normalcy and the whole routine of it, seemed absurdly, well, regular. I stuck it through and got some images I’m happy with. I’m sure something from the backstage will make it into an edit, because it’s such a large part of the culture and one of the few things that most people know about ladyboys in Thailand (they do cabaret!), so I feel like it needs to be represented. Plus too it’s so distinctly different from the other people I met. Like the Olympics or World Series of the transgendered fashion world.