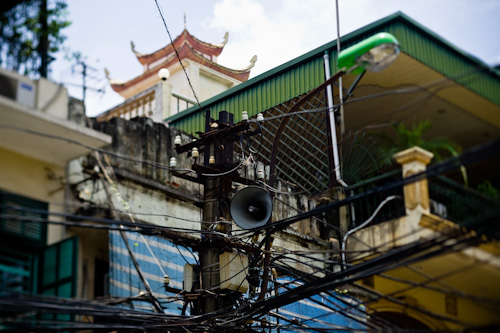 The above image is from the beginnings of a new personal project that I’m working on, tentatively titled Reveille. Right now I’m just brainstorming with my camera, but I like the way it’s progressing. I’d like to say more, but all my thoughts feel a bit half-baked since I’ve only just started. I’ve got sketches down and I’ve compiled a few random lists, but past that and a day of walking around photographing little things, nothing is very far along. I think it will be more artistic in nature. Blurry and a bit as if seen through a certain haze. Bright and colorful. Maybe somehow depicting a very specific side of Hanoi. A kind of communist manifesto.

I’m also hoping to continue with a few projects that I’ve let fall by the wayside these past few months, and even some offshoots of those projects. There’s still a lot more I want to shoot down by the Red River, particularly since the capital has just signed off on the construction of a new mega-city along the river’s banks that will displace/relocate tens of thousands of residents over the next 10 or so years. Pollution will continue to be a problem everywhere. Youth culture here is an interesting amalgam of international trends and classic awkward/abrasive behaviors. And with next year being the 1000th anniversary of Hanoi, ideas should abound on ways that we can all illustrate this milestone.